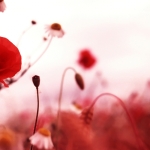 .
The poppy is an internationally recognized symbol of respectful remembrance for surviving war veterans and those lost in battle. Poppy symbolism originated during the First World War, between 1915-1918. That’s when dormant wild poppy seeds began to germinate and grow amidst the shadowy war-torn landscape near the front lines of Belgium and France. Thus, these persistent and naturally vibrant splashes of colour became symbolic of life.

“In Flanders Fields” by John McCrae (Canadian soldier, May 1915) gives poetic verse to the delicate-yet-hardy poppies that sprouted from the freshly turned burial grounds of WWI. The poem includes some of the most famous lines written in relation to the First World War.

Also, in honour of Remembrance Day this year…
The Periwinkle knitting cafe in the UK organized a Remembrance Day poppy plan. Congrats to them, for creating a yarn-bomb display of over 1000 hand-knit/crocheted poppies—exceeding their goal of 100 handmade poppies!

And speaking of the “blooming” effects of war…
“Rosies of the North” by the National Film Board of Canada is a 46-minute Canadian documentary film which recounts the WW2 perspective—a time when men went off to battle and women stepped-in to fill jobs building fighter and bomber aircraft needed for the war effort. The film’s focus is not knitting, but it did include a couple of “vintage” comments with regard to knitting 😉

For a close-knit world, it is important to
pause and give thanks together… lest we forget!
Giving all thanks to God our Father…
for the strength He gives to brave hearts…
Brave hearts who willingly fought and
continue to fight for the sake of world peace
and freedom for us all! ♥ Jackie

The way I see it... Blogs are virtual, yet somehow real. Hearts are symbols of love held dear. And so, behold my virtual salutation! I've high hopes for filling this blog with expressions of creative communication ❤ Jackie Knitting With Heart... luv 'n stitches for our tired old world.

my patterns on RAVELRY

THIS DAY WE FIGHT

Short Moral-Based Stories; Poems;with Biblical overtones-Enriching your life in a positive way with ideas and stories; and the best real news links & 411 Ever -No BS here!

The Armageddon Times
Rejoice in the God

"in thy presence is fulness of joy"

Where Deplorables Hang Out

Have Faith and Love

Jesus came to save

Enjoy the Ride not the Elements

What Did You Say?

The Rayfield Company LLC
Watch Your Life and Doctrine Closely...

...for by so doing you will save both yourself and your hearers - 1 Timothy 4:16

Bringing You The Stories That Matter.

Biblical Patterns for the Christian Life

Back to Basics -In Pursuit of Personal Revival and Holiness

Exposing media fakery one PsyOp at a time

Social and political evolution from a conservatarian perspective

Restraining Government in America and Around the World

Keeping you up to date with World Events as biblical prophecy unfolds.

Scribbles of an earthling somewhere 😊😊

A blog of meditations about God's grace at work

Commissioned by Him
words, pictures & cake...

& other reasons to be cheerful

God's Word is worth celebrating! My prayer is that you will join me in celebrating God's Word by regularly reading, studying and applying it.

Bridging the gap between mere existence and true life.

What really matters at the end of our life or journey here on earth is whether we are saved or lost – not our accomplishments, attainment, earning, education or degrees, knowledge, learning, possession, or position.

ruminations & travesties of the favorite yet naughty son of Nengkoy

The greatest WordPress.com site in all the land!

Podcasts to Glorify the King

Through these he has given us his very great and precious promises 2 Peter 1:4

The Great Commission, The Great Experiment, Virginia and my musings